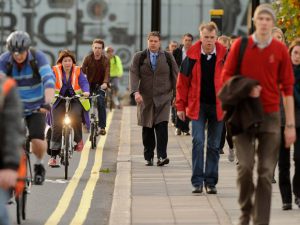 Travel to work as working time

There has been a dismayed response from employers following the European Court’s decision to say that travel to the first job of the day, from home, should be counted as working time.  This dismay has led to some exaggeration of the point and therefore, we wish to set out the facts in relation to this ruling.

We published an update two weeks ago because the Advocate General in Europe had published his opinion that travel to the first job of the day should be working time. It was always highly likely that the EU Court would follow his opinion.

However, this case was decided upon particular facts, and caution should be applied before extending this ruling too far.  It does not apply to anyone who simply travels to the same place of work every day.

In this case, Technicians visited client’s premises. In the morning, they would travel directly from home to their first job. The Employer paid them when they arrived at their first job.  The court has said, that because they could be diverted on their way, to any place the employer wished, then they were at their employer’s disposal. Such time should be working time.

In some arenas, it has been suggested that this will have vast impact upon the costs of employing people. It is certain that some businesses will find extra costs associated with this, but by no means all. For example, it has been suggested that travelling sales people will now get extra money for their travelling time. However, this is by no means the likely outcome because most sales people control their own hours and so the working time regulations do not apply in many respects. In addition, most are salaried and well above the national minimum wage thresholds.

This employers who will have to think this through are mainly in the construction and domiciliary care industries. This is where people regularly travel to their first job, often considerable distances, and this will need to be considered in the particular circumstance of each business.

Read the case first hand at the following link: http://www.bailii.org/eu/cases/EUECJ/2015/C26614.html

Regarding the case on traveling to work being working time, it has been pointed out that we have erroneously referred to the minimum wage when the case concerns time limits only.

We apologise if that caused confusion.

Our thanks to Gillian Manning for pointing this out.